This post is just a suggestion for language designers of Object-oriented systems. Nothing really new except my new approach to see objects. Sorry, Alan Kay, but the main concept of OOP doesn’t lie with Message-Passing, but mostly with all the sort of Relationships among objects. These relations are already well-known: Inheritance, Delegation, Composition, Ownership, Cloning, Message-Passing (yes, it also counts) and so on.

The most important thing to realize is that we can generalize these roles into visibility scopes (which are commonly enumerated as public, private and protected). Relationship roles generalized as visibility scopes are more flexible and extensible than the today’s visibility scopes known in the Java/C++ world. Also, ‘cause these roles are relative, they can be overloaded (but not overridden with some kind of super-sends that would break encapsulation) through subjective/contextual mechanisms.

For example, suppose that we want to restrict state mutation only to the owner object, then we just define setters visible only for the current owner object. In this way, fine-grained control over what to expose for who is easily achieved without the need to invert control with dependency injection just to workaround encapsulation leaking.

Of course, some design restrictions are needed, for instance, any object can’t own itself. We can implement the classical public, protected and private visibilities with these roles, too.

In our proof-of-concept, we’ve considered only Message-Passing, Static Inheritance and Static Ownership for a matter of simplicity. So, our relative scopes are:

Notice that we haven’t the analogue of the protected scope (that is, roughly, the symmetric sum of self with child¹). We can achieve that with some mechanism to symmetrically compose scopes for access (in the same way of traits) and synchronize them for mutation (as like mutual observers), but again, our goal is simplicity to explain the concept. While access occurs on all of the implemented scopes, mutation can only occurs on the self, the owner and the default scopes for a matter of encapsulation policies.

When some conflict arises (e.g, the sender is the receiver’s parent and receiver’s owner at the same time), the precedence is for the Static Inheritance rather than Static Ownership (this is just a design choice, though). In the inheritance relation, the child object only inherits the child scope and the default one. The figure below contains the full scope rules for access (the scope rules for mutation are quite trivial): 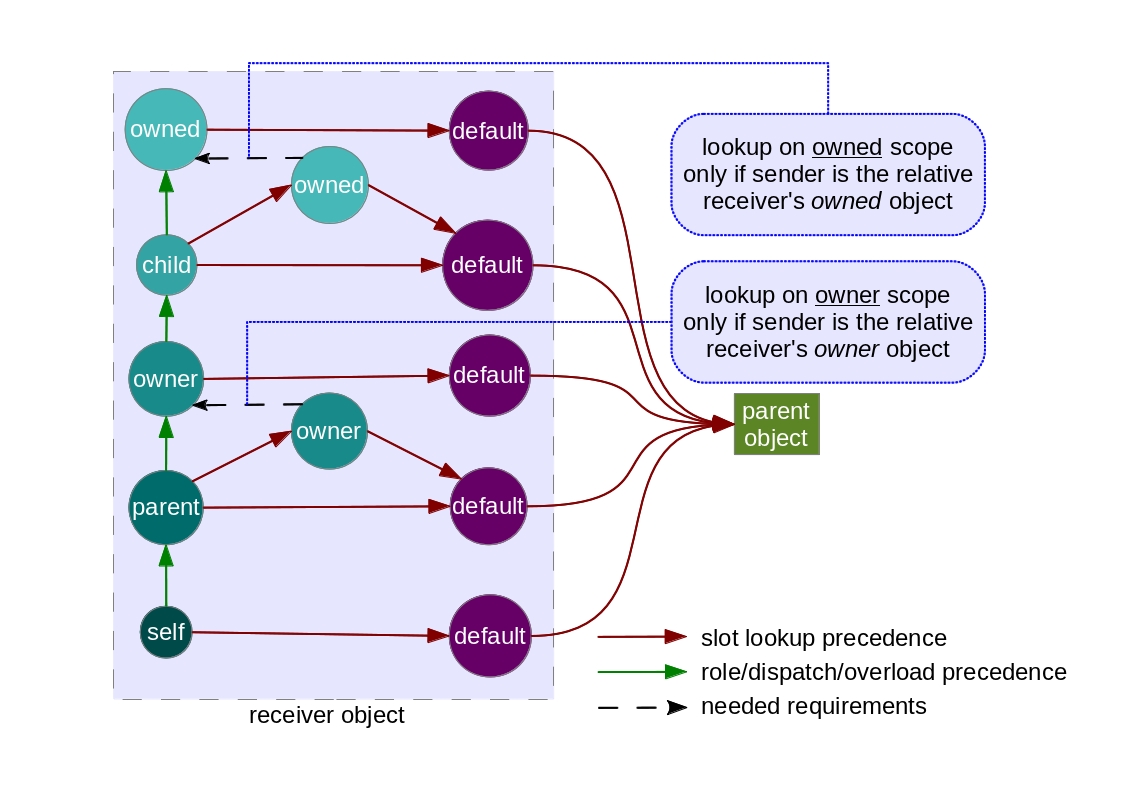 As you can see, Static Inheritance may overload some slots/properties of Static Ownership. This image is a bit complex, this is why we’re only taking a few relative scopes into account. Well, now is the right time to show you guys some piece of code.

Our code relies mostly in the debug.getlocal function. If you have read the entire Lua’s manual, you can already know that the debug API (almost unsafe) cannot deal with Tail-call Optimization properly (this is not the fault of the minds behind the Lua language, this is intrinsic to TCO per se). So, the programmer must pay attention in her code against TCOs to avoid unexpected issues/side-effects while using this library. We’re still thinking in some better solution for that…

The examples below show a simple usage of this library:

The concept of relative scopes are really interesting and similar to subjective/contextual programming in some sense. Fine-grained visibility scopes per sender object’s relative roles give an almost full control of the kinds of data to expose for who, but are prone to an increasing complexity in the implementation. We’ll also think in further new relative roles of objects (who knows if we can achieve something else with an investigation about Design Patterns?).

There are still many relative scopes to implement by hand (based on our “specification”), a painful task together with some careful design choices. Nevertheless, Subject-oriented Programming can be the light in the end of tunnel, the only left question is how to integrate that in a well-designed system with strong encapsulation policies. Of course, we must generalize our concept.

Have you enjoyed this post? Want to write something about that suggestion, too? Please, make a reference for this blog entry into your article’s footnote (of course, if you can). Thanks, anyway.

¹ - Although our system publicly leaks the parent’s child scope into child object due the system semantics. [Take me back]