In my first post, I want to discuss how interestingly delegation can be thought in terms of object structure. My major reference here is the paper Delegation as a Sharing Relation: Characterization and Interpretation (made by Daniel Bardou). But, first and foremost, let’s discuss what is intrinsic to all object structures.

We can sketch an object in terms of a table: let’s call the first column as the selector and the second one as the value. Also, we’ll call every row, from now on, as simply property, which is a pair/entry of an unique selector pointing to any value. 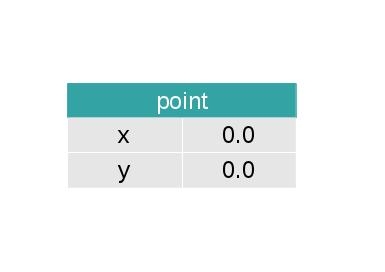 Selectors in any table (i.e, object) can’t change, otherwise the uniqueness of object’s selection (accessing the state or sending some message) is broken. In SQL terms, this column will be the primary key. ‘Cause state mutations occur frequently, our value column is also writable. Pay attention that, despite selectors being read-only, they can be removed if the whole entry (that is, the property) is also removed. This property erasing mechanism may be performed while setting a special value, such as null, nil, undefined or whatever, but in our discussion it will be erase (I’m reserving nil to trigger lookup in parent objects).

Bardou shows different kinds of sharing among inheritance and delegation, and also compares them in his paper. For me, I will take two kinds of delegation sharing, called as property sharing and value sharing. Firstly, I will show how value sharing can be represented below: 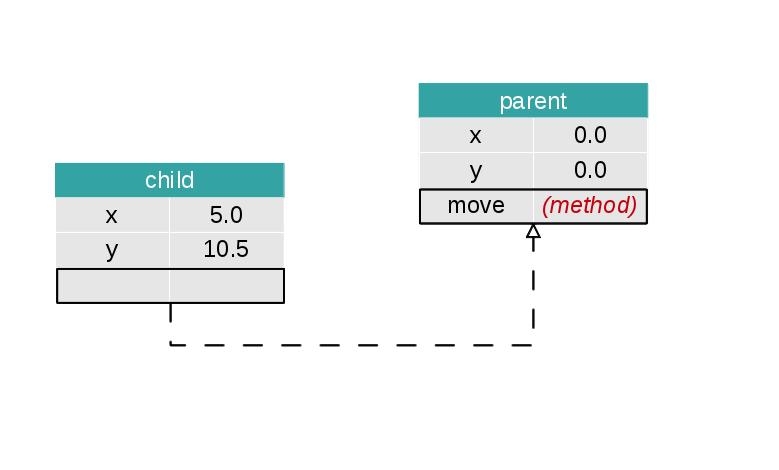 From the example above, we can easily deduce that the child’s selection itself will be delegated to its parent rather than delegating the lookup of some non-nil value. It has interesting implications, the main one is that not only the state access can be delegated, but also the state mutation (because this is performed after finding a proper property). This, in the literature, is known as split objects representation. We also can easily implement subjective/contextual programming with that. Nevertheless, without the proper care, it can lead to inconsistent softwares, mostly ‘cause it gives the power to the child object break encapsulation of its parent, and when there is a bunch of child objects, things can be out of control, worst even in non-concurrent environments.

So, which is the best sharing delegation mechanism? The answer is both. While the former (i.e, value sharing) protects the object’s identity, it also encapsulates too much to the point where an object may end with too much responsibilities/concerns. For the latter, it is very useful to provide well-factored code, proper separation of concerns, maintainable and modular code, etc, but state mutations can break your system reasoning through entangled web of dependencies. For the rule of thumb, use property sharing when the state changes don’t occur often, and value sharing when your object is not taking too much methods in its behavior.

To implement a proof of concept, I have chosen the Lua language. The code is shown below (don’t worry, I’ll explain step by step every piece of code):

In his paper, Bardou cites an interesting issue:

Property sharing raises also the problem of object identity. If child objects have to be considered as extensions of their parents, one can not put any frontier between objects: every object can create an extension of another one in order to gain full access to its properties. This problem is well discussed in [13].

To address that, I’m using the protected property to put some frontier between objects: an object only can be split into another representation if this property is set to false. By default, this property is set to true and is inherited by all descendants of prototype. Nevertheless, objects themselves may overwrite this in their own properties. ‘Cause this property can be modified during runtime, triggered delegation of mutation on parent’s properties may fail. I have put this constraint to give us a soundness feeling of the system.

There are 3 types of metatables, one for every kind of operation performed among objects, which are cloning, split extension and read-only aliasing (this latter for the sake of good practices). Cloning here stands for value sharing while extension stands for the property sharing. The lookup algorithm goes into the parent slot, which is not late-bound to disable unwanted recursion. The parent slot is also writable, which gives us Self’s behavioral modes for free (although our design decision is almost limited as like single-inheritance).

The erase property is a kind of final implementation in the same way of Java’s final keyword: it can’t be overridden and is also inherited by all children objects. The value of the erase property halts the lookup if it is not being run with the erase selector (we still need to access this magic value through erase, after all). When the lookup stops by halting or by failure, it “re-dispatchs” the selection to the missing error handling method, which is expected to deal with non-existent properties.

Finally, we export an immutable alias of the prototype to prevent external modifications into this object. If you are paying attention enough, you may have noticed that it disallows us to call extend directly into prototype (‘cause we can’t modify the already set protected property), this is due the fact that the prototype plays the role of an abstract object to provide a small set of behaviors while also being a factory of objects through the clone operation. Observe also that, despite being immutable, the external reference of prototype can, without problems, create mutable instances. It’s also valid for every kind of immutable view of an object…

A silly example of how using the implementation module follows:

Oh God, I am tired… stay tuned on for further posts here. Thanks.